I was born on an island
Where the dunes are high
Where the sand of the beach is white
Where the clouds are chased
By the south-west wind
Along the blue blue sky
I grew up as a child
With the wind in my hair
With the sound of the surf and the sea
As I stare, I go back to my memories
Of the grey green sea

On my knees in the water
With the sun on my back
I made a dam to stop the stream
And I fought, 'cause I thought
That I could win
I believed in my dream
I grew up as a child
With the wind in my hair
Nothing impossible for me
If I could, I would take all the children of the world
To the grey green sea

I grew up as a child
With the wind in my hair
With the sound of the surf and the sea
When I die, I will fly, fly back home
Over the grey green sea 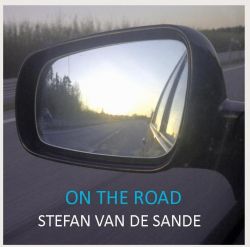 Album: On The Road

Info: Writen in Zeeland, Kamperland. I made a 'Strandpaviljoen' Tour in the summer of 2014. Almost every day I played my songs while I was looking over the sea. That sea which has been for me so important in my youth. Spend hours and days at the beach, in the dunes, fishing in the warm summer nights.

I wish all children could have such a youth!