A short video about my life as a Troubadour and why I made a career change.

In the program series "Wij Zijn Zeeland", Omroep Zeeland broadcasted on September the 26th, a short video about my life as a Troubadour.


The video is recorded at the Veerse Dam in Zeeland and at the beach of Vrouwenpolder.


The Veerse Dam is the place where my first memory lies. With my father I saw that the last caisson was brought in to close the dam. The Veerse Dam was one of the first dams of the so called 'Delta werken'. A dutch flood protecting program. That was 1961.

The beach and dunes of Vrouwenpolder became later for me important because I spend there many hours and days/weeks during the weekends and holidays.

I am very happy with this video. It shows me in optima forma and in circumstances where I am at my best; with my guitar and sharing thoughts about life.

For me the most beautiful part in the video is at the end where I say something like:

(If you do what you like, it goes without saying)

The songs I perform are parts of Poems and Dreamsong.


The video is filmed and made by Nens Kok from Fides Video.

The video is also available on the website of Omroep Zeeland. https://www.omroepzeeland.nl/tv/programma/37006009... 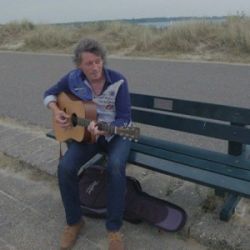